Many people, including the developers of Haskell (see here) and OCaml (see here) compilers, have been quick to dismiss the shadow stack algorithm for performance reasons.

Despite these concerns, we chose to use a shadow stack in HLVM for several reasons:

Consequently, it is interesting to use HLVM to measure just how expensive its GC and shadow stack implementations are. This cannot be done directly because the shadow stack is essential for garbage collections to work so removing the shadow stack must also remove the whole GC. However, we can benchmark with full GC enabled, with shadow stack updates but no collections and with GC completely disabled: 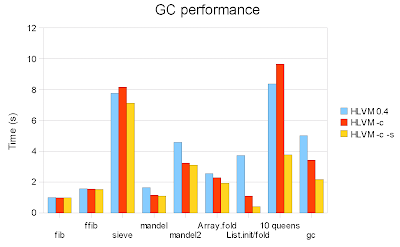 The difference between the last two measures gives an estimate of the time spent updating the shadow stack and we can present that as a ratio of the original running time: 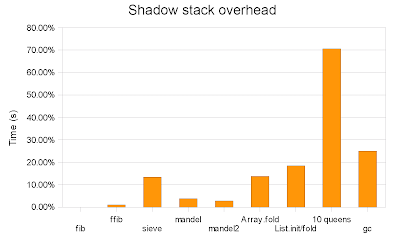 This is only an estimate because disabling the GC affects the performance of the rest of the system, most notably leaving more allocated blocks for malloc to handle and degrading cache coherence by cold starting all allocated values.

These results show that the time spent manipulating the shadow stack is:

We can also see that the List.init benchmark is spending most of its time performing collections.

These results are very encouraging for two reasons:

Suffice to say, we are very happy with these results and intend to continue using the shadow stack algorithm.

This confirms our suspicions that the few lines of real-world Haskell software ever written have been tested by only a handful of people. Perhaps Haskell will become more mainstream in the future but it seems to be quite a long way off today.

Alp Mestan has begun work on the first front-end for HLVM. This project has many important goals:

Alp intends to apply to Jane St. Capital to fund a summer project that will port the entire OCaml compiler to HLVM.

A quick update due to a surprise performance result for HLVM!

We knew that manipulating the shadow stack was a major slowdown in HLVM from the change in our benchmark results when the GC was first introduced a few weeks ago but we did not expect that a simple local optimization, unrolling, could go so far towards recovering performance. Moreover, this optimization was implemented in only a few lines of OCaml code. 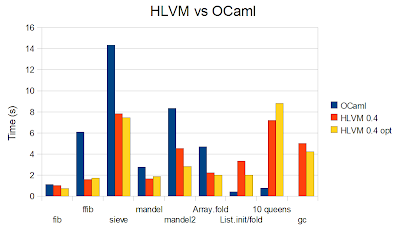 Someone recently published a blog article about the sizes of values in the Ruby and OCaml programming languages.

This is also interesting in the context of HLVM because our high performance goals also require an efficient memory representation but our solution is quite different to OCaml's because HLVM is designed for numerical performance whereas OCaml was designed for symbolic performance.

The following table lists the sizes of values of several different types in OCaml and HLVM on 32-bit architectures:

Our HLVM project is evolving rapidly and recently saw its first release with a working garbage collector. This has allowed us to make some performance measurements and, as we had hoped, the results are extremely compelling.

The following graph illustrates the time taken to perform each of the benchmarks in the HLVM test suite on one of the 2.1GHz Opteron 2352 cores in an 8-core Dell PowerEdge: 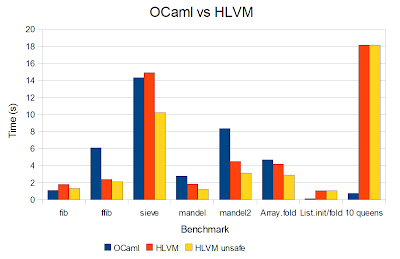 The individual benchmarks are:

These results show that the latest HLVM is already faster than OCaml on three tests (ffib, mandel and mandel2), gives comparable performance on three more tests (fib, sieve and Array.fold) and is substantially slower on the allocation and GC-intensive list and 10-queens benchmarks.

The third set of results labeled "HLVM unsafe" refer to results obtained by manually avoiding manipulation of the shadow stack when it is not necessary (note that the GC still runs exactly as before). This is the next major optimization that HLVM is likely to automate. With this optimization, HLVM also outperforms OCaml on the sieve and Array.fold benchmarks.

Suffice to say, we are very happy with these results and are now encouraging others to invest in building upon HLVM now that the basic infrastructure is in place. We have already had interest from the developers of HaXe and PolyML in using HLVM as a new VM for their compilers and another group are applying to the Jane St. Summer Project 2009 for funding to port INRIA's OCaml compiler to HLVM.

The next major step for HLVM is support for parallel threads. This will be implemented by cooperatively suspending all threads, performing a GC using the current implementation and then resuming the threads. This alone will make HLVM significantly more capable than OCaml when it comes to parallel computing and our next set of benchmark results will include parallel programs!

We have made the first public release of our much anticipated High-Level Virtual Machine (HLVM) project. The complete source code is now available from the HLVM project page on the OCaml Forge via the subversion repository.

HLVM makes extensive use of some features only recently added to LLVM and, consequently, requires a patched version of LLVM 2.4 or later.

Even at this early stage, our performance results are extremely compelling. HLVM is already several times faster on a variety of benchmarks than some notably high-performance functional programming languages such as OCaml. HLVM is specifically designed for technical computing and we believe it will offer the best performance for numerical computing of any high-level language including easy-to-use support for parallelism. We also intend to provide extensive support for visualization using OpenGL and make HLVM a viable platform for both free and commercial software in the future.

This open source project has been solely funded by Flying Frog Consultancy. If you would like to contribute funding, resources or help to develop HLVM yourself please get in contact with us.