Does reference counting really use less memory than tracing garbage collection? Mathematica vs Swift vs OCaml vs F# on .NET and Mono

Our previous post caused some controversy by questioning the validity of some commonly-held beliefs. Specifically, the beliefs that reference counting (RC) always requires less memory than tracing garbage collection (GC) and that tracing GCs require 3-4x more memory in order to perform adequately. We presented a benchmark written in Swift and OCaml and noted that the RC'd Swift implementation ran over 5x slower and required over 3x more memory than the tracing GC'd OCaml implementation. This observation disproves these beliefs in their strong form and even brings into question whether there is even any validity in the weak forms of those beliefs. After all, we have never seen any empirical evidence to support these beliefs in any form.
We received a lot of criticism for that post. The vast majority of the criticism was not constructive but two valid points did arise. Firstly, although our result was anomalous it would be more compelling to see the benchmark repeated across a wider variety of production languages using both RC and tracing GC because this would help to reduce the error caused by differences other than GC strategy. Secondly, it would be more compelling to repeat the study with different benchmark tasks in case this one problem (computing symbolic derivatives) is anomalous. This post addresses the former concern.
We implemented equivalent solutions to the original Swift and OCaml, this time in F# and Mathematica. The F# uses a tracing garbage that is inherited from its runtime (either Mono or .NET). Mathematica is a domain specific language (DSL) designed specifically for computer algebra that uses its own heavily-optimized RC implementation so it stands the best possible chance of being able to compete with the original OCaml. So these additional measurements should usefully extend the applicability of our findings.
The F# 4.0 code was run on Mono 4.6.2 directly on the Raspberry Pi 3 alongside the Swift and OCaml and also on .NET 4.7 on Windows 10 (i.e. different architecture and platform!). Our results for Mathematica represent excess memory consumption over the initial consumption (because Mathematica has a uniquely huge standard library) and were obtained running on Mathematica 11.2 in the cloud and 10.0.1 on the Raspberry Pi 3.
According to our measurements, the solutions using tracing GCs require less memory than the solutions using RC in every single case: 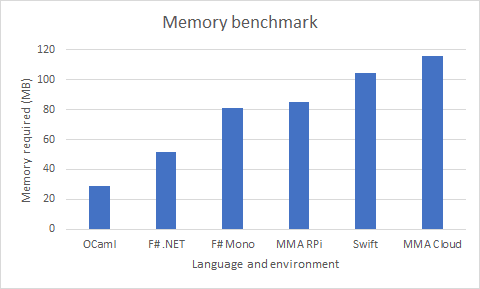 Again, we find that this common belief that RC requires less memory to be unjustified.
Just out of interest, here are the run times too (on Raspberry Pi 3 only): 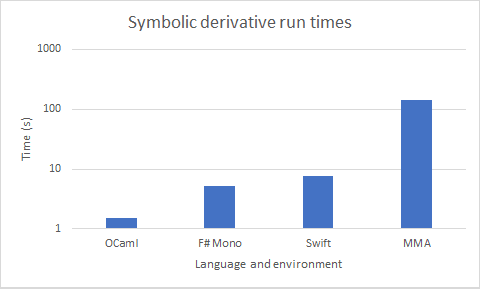 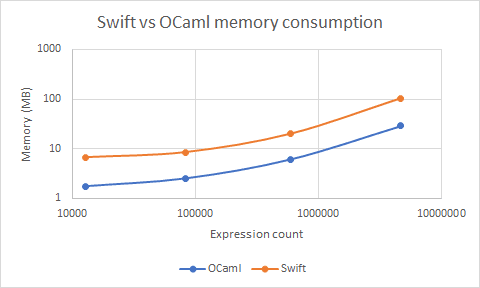 Turns out the Swift code can be shrunk by prefixing function parameters with an underscore in order to avoid having to name all arguments at all call sites so the code sizes aren't amazingly interesting, except perhaps that it is awesome to see more mainstream languages providing union types and pattern matching. The compile times are interesting: OCaml is very fast so 3x slower than OCaml is actually pretty good. Many languages are orders of magnitude slower than OCaml at compilation. The run times are very interesting to me because I have previously noted reference counting in C++ running 10x slower than OCaml and fully expected Swift to be slow at this because reference counting is slow but exactly how slow I didn't know because I am aware that Swift goes to great lengths to try to optimise away increments and decrements of reference counts. The memory consumption is a really amazing to me. Swift uses over 3x more resident memory than OCaml. Wow. Not even close!
This cannot just be because every word-size datum in the heap has been augmented with a word-sized reference count because that could only account for a factor of two. I suspect OCaml's tracing garbage collector is collecting garbage earlier than Swift's reference counting. I'll wager part of the problem is that Swift leaks in the presence of recursion due to the use of scope-based reference counting without tail call elimination. If so, that is an obvious optimisation for Chris to put into his Swift compiler. I'll leave the task of replacing my recursive nest function with an iterative looping one to test this theory as an exercise for the reader.
Anyway, the conclusion seems clear: in at least this case reference counting requires more memory than tracing garbage collection. Therefore, it is unreasonable to make assertions like "tracing GC requires 3-4x more memory than reference counting to perform adequately".